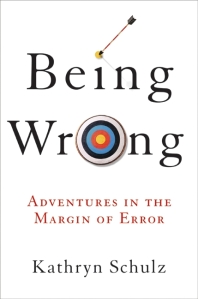 “As perverse as it may seem, these many forms of creatively dodging the counterevidence represent a backhanded tribute to its importance. However much we ignore, deny, distort, or misconstrue it, evidence continues to matter to us, enormously. In fact, we ignore, deny, distort, and misconstrue evidence because it matters to us. We know that it is the coin of the epistemological realm: that if we expect our beliefs to seem credible, we will have to furnish their grounds. ….If we think we hold our beliefs because they comport with the evidence, we must also think that we will revise them when new evidence arises. As a consequence, every proposition, no matter how much we might initially resist it, must have an evidentiary threshold somewhere, a line beyond which disbelief passes over into belief. …we see evidentiary thresholds being crosses all the time…

But we also see evidentiary thresholds not being crossed….As powerful as confirmation bias is, it cannot fully account for this: for the persistence and duration with which we sometime fail to accept evidence that could alter our theories. Another factor is the claim, implicit or explicit in many belief systems, that attending to counterevidence can be dangerous – to your health or family or nation, to you moral fiber or your mortal soul,. Confirmation bias is also bolstered by the fact that looking for counterevidence often requires time, energy, learning, liberty, and sufficient social capital to weather the suspicion and derision of defenders of the status quo. If the dominant theory works to your detriment, odds are those are resources you don’t possess. And if the dominant theory works to you advantage, or at least leaves you unscathed – well, why bother challenging it?”