A couple of days ago, Elaine Keller wrote a great comment to the article Word Wars and Tobacco Control at the BMJ Group Blog.

Excerpt from that posting:

In too many places even today, tobacco use is still taken for granted and if problematised at all, is understood primarily as an individual ‘bad habit’ rather than an ongoing failure by governments to provide adequate public health-based constraints on the disease-promoting practices of powerful corporate interests.(3–5) This is why it is important for all of us to attend to how our language serves or undermines tobacco companies’ preferred framing of ‘smoking and health’ issues, of cigarettes as a ‘risky product’ and of ‘responsibility’ as comprised primarily of providing ‘information’ in a decontextualised way.(6)

Instead, we should insist on talking about ‘smoking and disease’, ‘deadly products’ and corporate responsibility as acting in a way that is consistent with being fully accountable for the effects of the products one sells when they are used as intended. We should also discontinue discussion of ‘giving up’ smoking, a construction that makes becoming free of tobacco addiction a loss rather than a gain; we should stop calling our new pack labels ‘graphic health warnings’ and instead call them ‘graphic disease warnings’. We also ought to stop calling tobacco addiction a ‘habit’, as though it were comparable to the habits of brushing one’s teeth, eating cereal each morning for breakfast, or staying up late at night reading in bed.

Using the word war in the title of the article is the first clue to the mindset that argues for more linguistic weapons to add to the armory. They worry that their message is not getting through and believe the failure lies not in the message but in the tools. This from those who proudly call themselves Tobacco Control, who champion the use of the word safe as in “not a safe alternative” or “no safe level of exposure” to make sure that smokers who were looking for ways of reducing their level of risk would not actually try those absurdly safer products such as smokeless tobacco or electronic cigarettes.

These very successful artists of slight of hand, falsely giving the impression they care about the disease caused by smoking, make sure that every time they dismiss some safer alternative in yet another article or press release never fail to add that tired boilerplate passage of how many people would die that year (do i hear 400,000 once again?), are concerned that the smokescreen they have worked so hard at, is just not thick enough. 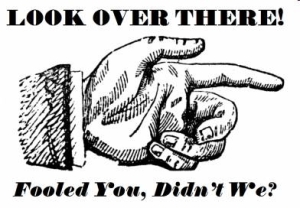 If they really thought the problem was as important as they claim, they would consider more than one solution. They would understand that people do in fact “give up smoking” because there are benefits, and those benefits are one of the keys to promoting successful safer alternatives.