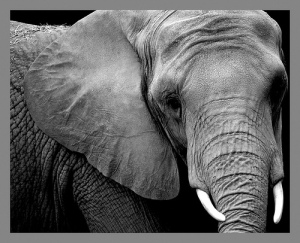 Forgive the proliferation of other life forms in this title (and post) but it seems that whenever nicotine or tobacco are discussed, we end up wading knee deep through a bog of misinformation and ANTZ (thank you again Kristin Noll-Marsh for this most appropriate acronym for anti-nicotine and tobacco zealots). So we end up talking of caffeine and automobiles and unlike most other health related topics having to dress the discussion in children’s clothing so as not to enrage or offend.

Some time ago, Elaine Keller wrote in these pages about the nicotine as self medication elephant. But it is just one out of this herd thundering about and for the most part ignored by diligent and blinkered prohibitionists. One of the other pachyderms is that nicotine use is just another human behavior and a particularly popular one if history is a guide (and shouldn’t history constitute better evidence than utopian (or is it dystopian) fantasies?). But the tusker today is one that even many pro-THR activists and vaping communities are not talking about.

This elephant is the likely increase in the numbers of never before nicotine users trying snus or vaping.

From the ANTZ side this seems worse than smoking. After all, the promise of low risk nicotine use can only result in more people trying it and more people staying with it. Once health risks are no longer a sticking point, it won’t matter if the nicotine using proportion of the population goes up or down (as Carl Phillips has pointed out time and again, the economics of the case are that when you lower the cost of something, in this case the health risks, consumption will increase).

From their point of view nicotine use is intrinsically bad and any associated health risks are a side issue. We know this because if they did care about health risks they would be agitating for THR on every street corner.

But to the point at hand.

The central hope of THR is that low risk nicotine use supplants smoking. Currently more smokers than ever are switching and this is good. Every survey of vapers seems to come back with a result that implies that almost every vaper is an ex-smoker or a smoker trying to quit. Snus users (outside of Sweden) seem to be more of a mixed bag but the proportion of switchers seems to be getting larger there as well.

And if there is one thing both camps agree on, nicotine is not for kids.

But here’s the thing. The presaging of victory will be when we see more would be nicotine users starting with these products. ANTZ will be up in arms but if we accept that nicotine use is with us for the foreseeable future then only once initiation is typically with low risk products will that future be a better one.

Right now, vaping is almost considered as a post-smoking activity. While it is great that smokers have switched, isn’t it a little odd that smoking be thought of as a precondition for vaping? Should you be allowed only to vape or snus if you have first exposed yourself to a high risk nicotine delivery system? Should we only let you use seatbelts after driving for a while without?

And that is why, and we have already discussed this point often enough, low risk alternatives need to be at least as accessible as cigarettes. If someone (old or young) is about to try nicotine for the first time, that choice should not be weighted, as it now is, toward the one choice that might have serious consequences. As we have already seen in Sweden, once safer alternatives are both accessible and socially acceptable, cigarettes can become the less favoured option. The would be smoker turning instead to snus or e-cigarettes is not only virtually eliminating any health risks but is also making it more likely others will do the same.

We need to reach that tipping point.

(Just a note for the ANTZ: you can only ignore elephants for so long. Once you factor in the size difference, safety in numbers no longer applies.)

9 thoughts on “There’s more elephants in the room or on contemplating the new user red herring.”